After Butter’s concept photo version 2, ARMY sees the kinky side of it and trends ‘THE HANDCUFFS’ – read tweets 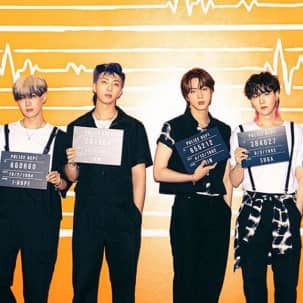 Yesterday, Big Hit entertainment released new pics of BTS for the Butter Concept Photo Version 2. V, RM, Suga, Jungkook, J-Hope, Jimin and Jin were seen dressed in blue and black. Their hair colour caught everyone’s attention especially RM’s streaks of blue and J-Hope’s mix of blonde and chestnut brown. But what gave ARMY a meltdown was the handcuffs. RM, Jimin, Jin, Suga, Jungkook and Taehyung were seen with black handcuffs, while Jungkook wore one in strawberry pink. Fans started asking if Big Hit is going to sell them as merchandise and how could one make a purchase. But the company has not said anything of that sort. Fans also remembered some BTS content on fan fiction sites that are kind of kinky. Here is a look at some of the kinkiest and funniest reactions… Also Read – Trending Entertainment News Today – Hrithik Roshan teases fans by going shirtless; Twilight’s official Twitter page changes its entire profile after BTS’ Jin gives the fairytale franchise a shoutout

HEART SHAPED HANDCUFF ON ONE HAND WITH THE OTHER HANDS ON THE POCKET AND WITH MATCHED PATTERN MOTIF FABRIC I KNOW THEYRE PARTNER IN CRIME pic.twitter.com/tdmb6xk8El

Others looked at the cam but JK turned to his left so that we can put his & Jin’s side by side to make it look like JK was looking at Jin. How thoughtful of JK!??JK’s handcuff was the only one in pink.?
JK: gonna ♡ handcuff Jin Hyung cos we must be near.
Jin: taken. #jinkook pic.twitter.com/SEHC9ZKHPr

How are we supposed to survive Peaches version after getting the heart-shaped handcuffs? pic.twitter.com/6HIbrLMcqN

hours later and I still haven’t recovered from the handcuff pics and I don’t think I will unless tomorrow’s concept 1ups it or I’m forced to write out the prompts I hav in mind pic.twitter.com/bL2eDvv6rJ

BETWEEN THEIR HAIR AND THE HEART SHAPED HANDCUFFS IM IN SHAMBLES pic.twitter.com/mSh7X0Rwa1

#taekookau where Jungkook’s the deceptively lovely detective – the youngest on the force, sweet as sugar with a pair of pink handcuffs.

And Taehyung is the city’s most wanted crime lord, untouchable for how there isn’t a single piece of evidence on him. Until. pic.twitter.com/BYelx8ux03

OMG JEON JUNGKOOK I SCREAMED. WOW IDK HOW TO FUNCTION. OXYGEN I DONT KNOW HER. HIS TATTOOS, HIS HAIR AND THE WAY HE’S STANDING OOOF AND OMG THATS SO CUTE THE CONTRAST WITH THOSE PINK HEART SHAPED HANDCUFFS ?????????? pic.twitter.com/Fa3jNbSxZt

So now broke army’s will date policemen to get the handcuffs and then arrest BTS for getting heartattack.

You can’t afford this go and date Policemen to get handcuffs. pic.twitter.com/QW6W3AzCda

I’m not holding my breath . When I see them all in handcuffs then I’ll believe the system worked.

I have worked all my life in the legal field & have seen the shenanigans.

We can see that ‘hard stans’ are having a field day. We also wonder what the BTS boys feel about such a trend on social media. They came online last night to thank ARMY as Butter stayed on No.1 spot on Billboard Hot 100 for five weeks at a stretch. Also Read – BTS’ Jin or V – Whom do you want to see in a Twilight film ? Vote Now