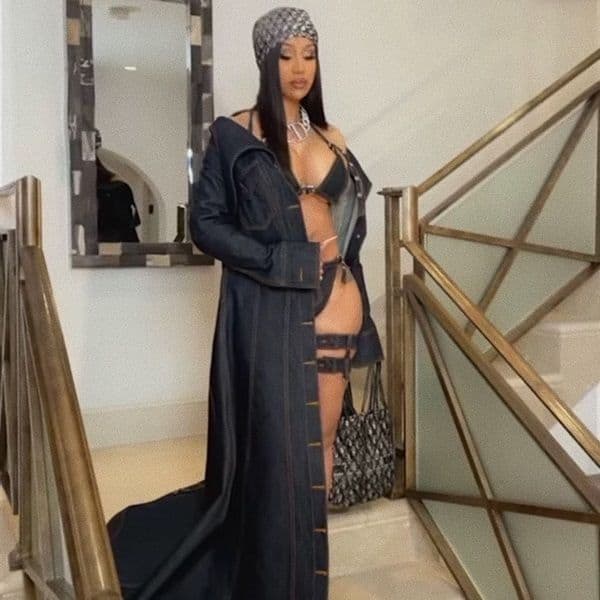 American rapper and actress Cardi B is known for taking the internet by storm with her inimitable style of promoting herself. She recently teased her fans with a 12-second video wherein she was seen flaunting her voluptuous figure in a black bikini and a long matching cape worn over it along with a headband. However, for her cryptic annoucement, she played the Nightingale of India, Lata Mangeshkar’s popular song Kaliyon Ka Chaman, from 1981 Bollywood movie Jyoti featuring Aruna Irani. And Twitter lost its calm tripping over Cardi B’s choice of Indian music. Also Read – Cardi B apologises after being called out for posing as Goddess Durga; says, ‘I do not like offending anyone’s religion’

In the video, Cardi B is seen climbing down the stairs in a bikini. She says that she has some annoucement to make. And the moment she says ‘bye’ to her fans, the Kaliyon Ka Chaman song plays in the background and the pop singer decends with an attitude. And Cardi B certainly grabbed the attention of the Indian audience who couldn’t believe that the singer just used Bollywood’s 80s song in her video. Also Read – Trending Entertainment News Today: Salman Khan slams Nikki Tamboli, Kajal Aggarwal’s honeymoon, Neha Kakkar’s honeymoon

I got a announcement to make tomorrow ? pic.twitter.com/5pVtJShEgg

That Bollywood music at the end got me dancing like ?

This is not the first time Cardi B used an Indian reference in her social media posts. Last year, she had posed as Goddess Durga for the cover of a magazine called Footwear News. Among her 10 hands, she is holding a shoe in one of them. Upset Indians called her out for cultural appropriation. Also Read – MTV EMA 2020: K-pop band BTS wins four big awards — see full list of winners

The pop star then issued an apology for the same. In a video story on Instagram, she had said, “When I did the shoot, the creatives told me I was going to represent a Goddess; that she represents strength, femininity and liberation, and that’s something I love and I’m all about. And though it was dope, if people think I’m offending their culture or their religion I want to say that was not my intent. I do not like offending anyone’s religion; I wouldn’t like it if someone did it to my religion.”