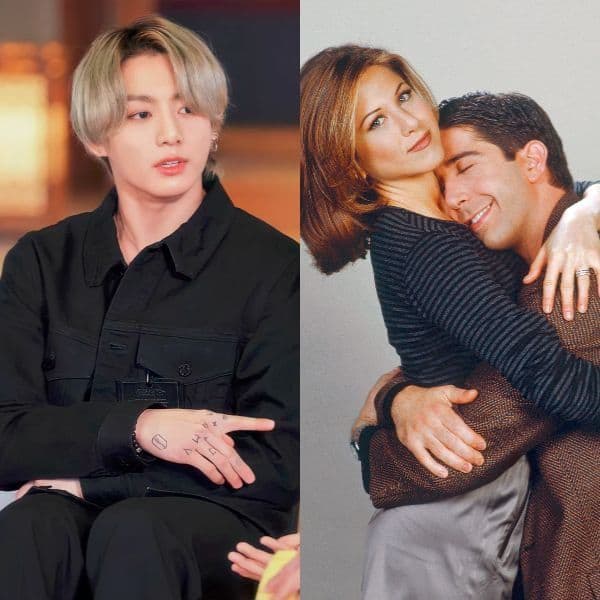 Pandemic or no pandemic, the world of entertainment just goes on. And it does provide us ways to cope with the grim realities From Jungkook helping out staff members post live shows to Ross aka David Schwimmer and Rachel aka Jennifer Aniston actually crushing on each other, here’s what all happened in Hollywood last week. Also Read – BTS: This is how Suga REACTED when an Army made a weird request to him during a live broadcast

FRIENDS reunion is currently making the maximum noise all over, and it should. Many people grew up watching the show and it has a great fan-following. But among all the happy news, the weirdest piece of information that hit headlines is about Matthew Perry and Courtney Cox being distant cousins. Yep, you read that right! A report in MyHeritage.com claims that Matthew and Courtney are 11th cousins as they share relatives William Osbern Haskell III and Ellen Haskell, a married couple who lived more than 500 years ago in England. Whoa, that’s quite in the past and the two stars definitely did not know about their connection until now. As per the report, Ellen and her two sons emigrated from England to America in 1635. Her son named Roger, is said to be the direct ancestor of Courteney. Another son named William, is said to be the direct ancestor of Matthew. The connection is made through Courteney’s mother Courteney Copeland, and Perry’s father, John Bennett Perry. As you might be aware, on the show Matthew and Monica played each other’s love interest and their chemistry was adored. by millions. Also Read – BTS septet’s new photoshoots from BUTTER is so HOT that it will blow your mind

This is an interesting development. Tobias Menzies (The Crown) and Sophie Okonedo (Ratched) joined the cast of the star-studded second season of Modern Love. They appear in an episode directed by John Carney, who also serves as showrunner and executive producer. The episode and series recently completed filming in Dublin, Ireland.

Did you know Ross aka David Schwimmer and Rachel aka Jennifer Aniston were actually crushing on each other?

Friends Reunion is still in the buzz. The unscripted reunion special saw the star cast of Jennifer Aniston, Courteney Cox, Lisa Kudrow, Matt LeBlanc, Matthew Perry and David Schwimmer sharing their experiences while working on the sets. David and Jennifer, who are known as Ross Gellar and Rachel Green, revealed that they were actually crushing on each other as they played onscreen couple on the show. As we all know that Ross and Rachel were seen falling in love with each other during the initial episodes and then get married as well.

Kim Kardashian and Kanye West sent shock waves across Hollywood as they announced their split. Though many saw it coming, their fans were left heartbroken. They have four kids together and are reportedly going to be co-parents. Meanwhile, in the latest episode of Keeping Up With The Kardashians, Kanye West made his first appearance of the latest season as he helped Kim arrange for Kris Jenner’s birthday surprise. In the 10th episode of Keeping Up With The Kardashians season 20, we see Kanye West helping Kim arrange for the birthday surprise of Kris Jenner.

BTS: Jungkook helping out staff members post shows proves that he is the most hard-working and humble person ever

BTS’ Jeon Jungkook is one of the most adorable members of the most popular Korean pop boy band. Not only is he an amazing singer and dancer, but he is also one of the most hard-working and charming individuals. Kookie is the golden maknae of BTS and he loves to be like a good obedient child of his hyungs. And he would obey everything that his hyungs ask for. Not only that, he is always there for his staff members and helps them post shows. Isn’t that really great?

That’s all, folks. See you all next week.

Joe Biden announces end of US combat operations in Iraq