Ekta Kapoor thanks RM aka Kim Namjoon for identifying with Humdard song from Ek Villain; Twitter tells her ‘it’s not what you’re thinking’ 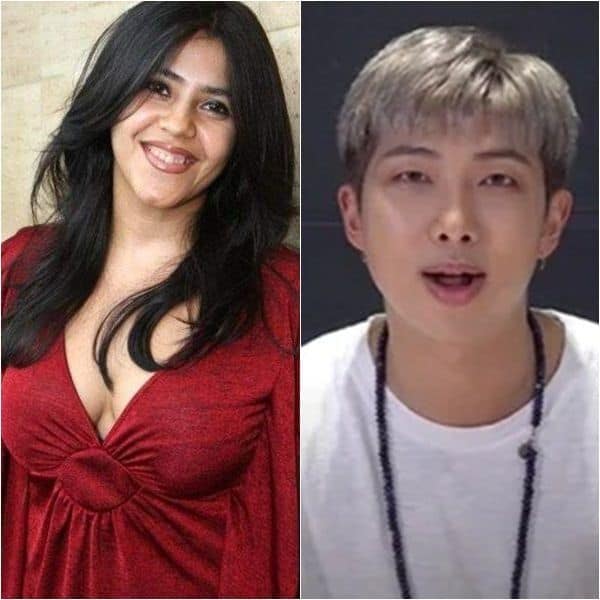 The popular South Korean band, BTS, enjoys a huge fan following in India. Like any other ARMY across the world, BTS’ Indian ARMY is also quite emotionally connected with them. While the septet comprising of RM, Jin, Jimin, Jungkook, V, Suga and J-Hope are missing meeting their fans and have also expressed their desire to visit India, one die-hard BTS fan recently wrote a heartfelt note to the BTS leader RM. Also Read – Kasautii Zindagii Kay’s Komolika aka Aamna Sharif FLAUNTS her sexy back in latest pictures and it’s too HOT to handle

The fan dedicated a few lines from Humdard song from Ek Villain to him by translating it in English. And when RM responded to the post on Weverse, the Indian BTS fan couldn’t stop jumping in joy. Reacting to the last line of the lyrics “now where else would be heaven,” RM replied, “Heaven is right here,” along with a purple heart emoji. As the Indian fans started sharing RM’s response on Twitter, it caught Ekta Kapoor’s attention. Also Read – BTS: A live show in India on the cards? Here’s what Jimin has to say

Responding to the Twitter thread, Ekta thanked RM for identifying with Humdard song from Ek Villain and said that music knows no boundaries. “Thank you, RM of @BTS_twt for showering Purple heart love on #EkVillian’s #Humdard and proving once again, that when it comes to music, there are no boundaries! #BTS,” she tweeted. Also Read – BTS’ Indian ARMY dedicates Ek Villain song Humdard to RM and his response creates fan frenzy

However, Twitter users were quick to burst her bubble telling her that it is highly unlikely that RM would have listened to the Humdard song. They commented on her tweet saying that RM has just replied to the last line of the lyrics which was shared in English. “first RM read the translation and replied to it.. even tho that girl mentioned humdard doesn’t mean RM knew it’s humdard song listened to it and your so called showed and replied.. stop daydreaming and try to understand what the situation was.. I knew this gonna happen+” one Twitter user commented.

Another Twitter user shared the English translation of Humdard song and wrote, “Ekta mam as u can see here an A.R.M.Y wrote this for Namjoon taking up “humdard” lyrics to show our love towards him & how his music heals us all.. so he replied back the answer of the last line written “now where else would heaven be” by saying ” heaven is right here.”

Thank you, RM of @BTS_twt for showering ? love on #EkVillian‘s #Humdard and proving once again, that when it comes to music, there are no boundaries! #BTS https://t.co/YuHNkirIfi

Lol i was just murmuring while reading this tweet like “what this ekta Kapoor is doing ” And my mum listened I guess so she was like: what you just said? Chapta Kapoor?!
I’m like what?! Aaah yes mum chapta Kapoor is better tho ?

first RM read the translation and replied to it.. even tho that girl mentioned humdard doesn’t mean RM knew it’s humdard song listened to it and your so called showed and replied.. stop daydreaming and try to understand what the situation was.. I knew this gonna happen+

Please i love that song but i’m sure he didn’t knew anything about that song when he was reading the lyrics he just read the translations posted by the fan and replied accordingly. Y’all making a big deal out of nothing ?

BTS don’t even know the existence of this song – but, Indian celebrities adding mirchi masala and posting on social media.

well it’s not what your thinking it to be pic.twitter.com/Tvb7n2ftNw

With due respect ma’am, i think there is some misunderstanding. Because he has never said that. The context is different. pic.twitter.com/gLNSc5b2Z2

Meanwhile, BTS wants the world to dance on their latest track “Permission to dance” as they have announced a challenge on YouTube Shorts. Starting Friday, fans across the globe can create a crisp 15-second YouTube Short from the mobile app, copying the dance moves in the music video.

The dance moves for this challenge are the International Sign gestures that the septet was seen doing in the music video, bearing the meaning Joy, Dance and Peace. As part of the challenge, BTS will spotlight some of their favourite shorts in a compilation video, so participants are encouraged to use hashtags #PermissiontoDance and #Shorts for their creations.