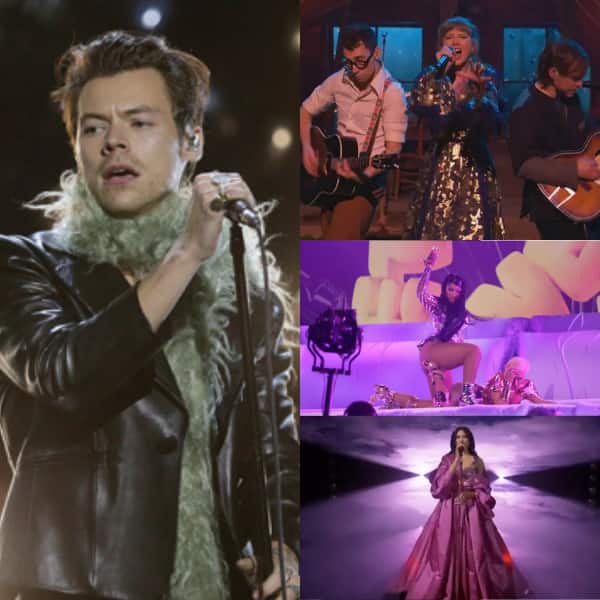 The 63rd annual Grammy’s are happening as you read this. Grammys are the highest honours in the music industry. Now, awards mean there has to be glamour, glitz, performances and more. At the Grammy’s this year, we saw a lot of celebrities performing for the first time, a lot of artists returning to the stage again. There will be several live performances alongside some pre-recorded ones for the likes of Taylor Swift, K-Pop stars BTS, newcomer Megan Thee Stallion, Billie Eilish, Latin star Bad Bunny, and many more. Let’s check out some of the performances shared by the fans on the social media handle, in case you missed out on watching the Grammy’s 2021. Also Read – Grammys 2021: ARMY trends #BTSOurGreatestPrize as Lady Gaga and Ariana Grande beat K-pop band to bag the best pop duo trophy

Harry Styles kicked off the 63rd Grammy’s with Watermelon Sugar. His energy on the stage was amazing. It set the tone for the day. The singer-actor looked very dapper in black leather jacket and pants which he paired with mint boa. Here’s Harry’s performance: Also Read – Week That Was Hollywood: Nick Jonas reveals how BTS inspired him, Meghan Markle-Prince Harry’s explosive interview with Oprah Winfrey

Harry’s high on energy performance was followed up by Billie Eilish’s ‘Everything I Wanted’. She performed on a half-submerged card which formed her podium. The soft melancholic performance was super powerful. Also Read – Grammys 2021: From BTS’ Jungkook’s performance to Justin Bieber-The Weeknd’s snub — here’s a lowdown

? @billieeilish performs her Grammy nominated song ‘Everything I Wanted’ ?pic.twitter.com/OXDyJfdbuD

Dua Lipa gave a stellar performance on Levitating and Don’t Start Now. Her sassy and upbeat performance was refreshing and amazing to watch. She looked absolutely stunning in a shimmery pink gown. She was later joined by Da Baby and together, they took the stage by a storm. Have a dekko at her performance here:

Taylor Swift brought Earth, greenery on the stage with her electric performance on Cardigan. Firstly, she looked breath-taking and secondly, the heavenly music and Taylor’s vocals. Her energy was just fantastic. Have a dekko here:

Megan Thee Stallion and Cardi B

.@iamcardib performs “Up” and “WAP” with Megan @TheeStallion at the #GRAMMYs. pic.twitter.com/mZATt92Xi7

BTS though they did not win, they performed on Dynamite and it was super amazing. The fun energy they brought in the awards night blew us all away. The BTS Army would be having a meltdown.

Martin Lewis issues ‘reminder’ on tax-free childcare but you may not be eligible – why? | Personal Finance | Finance