It seems Priyanka Chopra is ready for the summers. She took to Instagram Stories to share a new selfie from London. She was seen in a white crop top and denim shorts. She also wore a pair of white sneakers. It was a mirror selfie with Megan Thee Stallion’s song Hot Girl Summer, also featuring Nicki Minaj and Ty Dolla $ign, playing in the background. Have a look at the image below: Also Read – Nicki Minaj’s father Robert Maraj killed in a hit-and-run case 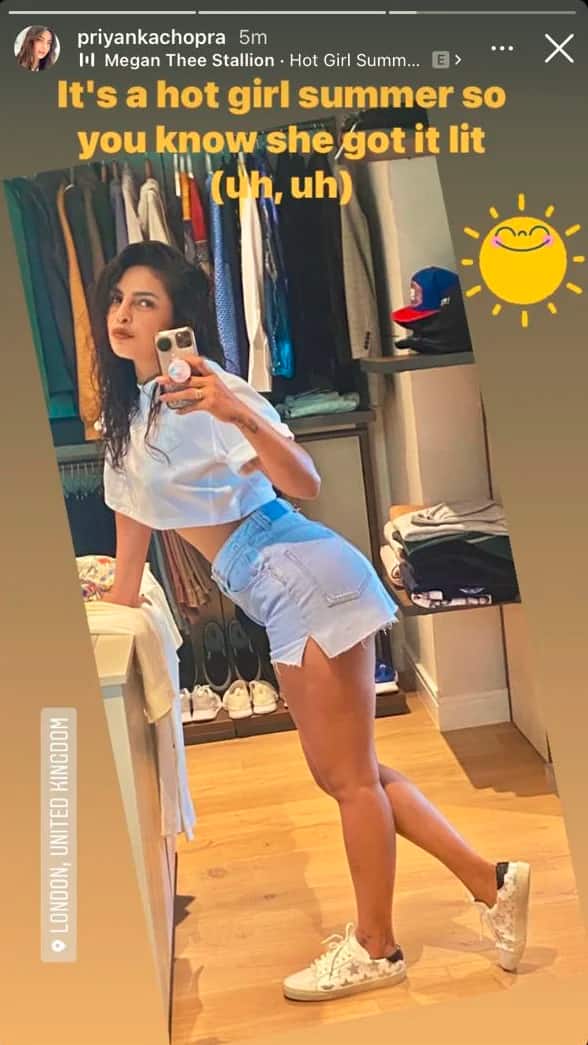 According to reports, Priyanka is in London to shoot for the Amazon series Citadel which also features Richard Madden. Also Read – Nicki Minaj announces pregnancy to the world in a bikini, cradling her baby bump — view pics

Priyanka had made a husband appreciation post on Instagram for husband Nick Jonas saying, “Husband appreciation post. Not even a cracked rib can stop this force of nature. So proud of you baby. With everything you do! Your work ethic, your pursuit of excellence! You inspire me everyday! Crushed it today! I love you so much!” Responding to the same, Nick Jonas commented, “I Love You More.”

Talking to Vogue Australia, Priyanka Chopra also revealed the secret behind their happy marriage. She mentioned that having able to have open conversation with each other has helped them be happily married.

She also spoke about their wedding, which took place at Umaid Bhawan Palace in Jodhpur. She said, “The secret behind world’s most epic wedding was doing it in two months. Because we did not have time to think about anything. So, by the time it was done, it was just perfect, epic.” Priyanka added that she is very privileged to be amongst a percentage of people around the world who wake up every morning and do something they love.

Priyanka was last seen in The White Tiger opposite Rajkummar Rao, which was a Netflix film. It was adapted from Aravind Adiga’s prize-winning novel of the same name. The film was helmed by Ramin Bahrani.