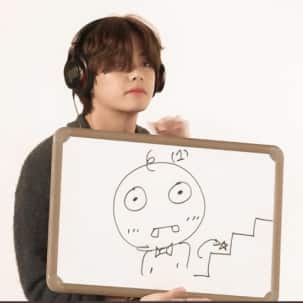 BTS knows how to keep ARMYs happy with regular content. After the VLive where they thanked everyone for their fifth week as No.1 on Billboard Hot 100 for Butter there was an episode of Run BTS as well. The boys looked really happy. However, ARMY noticed how V/Kim Taehyung and Suga seemed really happy and energetic all through. Suga’s savage quotient was visible all through. Here are five highlights from the episode that will make drive away your mid-week blues! Also Read – BTS’ Butter remains at the top of the Billboard Hot 100 chart for the fifth consecutive week

V’s playfulness
Kim Taehyung was in his element. The young man was told to make a drawing as a second grade student and he did it really well. The height was when he lifted up the chairs and table kept there and used it as exercise props. Also Read – BTS’ Jungkook names THESE 3 Korean celebrities as his role models! Can you guess?

can we talk about how creative & good kim taehyung’s drawing of 2nd grade on today’s run bts? pic.twitter.com/81rSCfKSGQ

Suga exposing ARMYs
This has to be the moment of the episode. We know THE HANDCUFFS started trending after their new pics. They were talking about the song Baepsea which is famous for the hip thrusts done by the members. Suga teased J-Hope that ARMY loved those moves and it kind of left them thirsty. Hearing that, Jimin and Jungkook say that even their hips worked hard and they are proud of them. Also Read – Want to join the official BTS club? Here’s how much you need to pay for the membership

If you are new to the fandom and do not know which song they are talking about. Take a look at the video…

Jimin starts singing
Park Jimin suddenly began singing Life Goes On in the middle of the telecast. He also spoke of how the Matrix move after a dance performance on Dionysus left him very nauseous.

Staff calls Jin handsome
We all know that Jin is worldwide handsome. The funniest part was when a staff member ended up addressing him as that in the episode.

EVERYBODY IS WHIPPED FOR KIM SEOKJIN EVEN THE RUN BTS EDITOR ?✨ pic.twitter.com/WZPtt4mv1n

Jungkook does laps
It seems Jungkook after winning a round started doing laps while eating a bowl of packed noodles. Fans cannot get over his cuteness.